So the list of available players for the GA are as listed below:

Using the two player random swap generated the best lineup with a salary cap of $81.285M and an overall team rating of 83.199.

Note that if you use any of these rosters the salary might be slightly off due to expiring contracts.

To find datasets for my SeaHAC 2019 talk please go to this link:

I’ve added new heatmaps to player and goalie pages. I am using the same information as the zone charts and just displaying it in a different way.

There are three steps to creating heatmaps.

I did this in PHP, but can easily be adapted to other languages.

END_OF_DOCUMENT_TOKEN_TO_BE_REPLACED

You might have, in the past, tried to upload videos to Streamable. You may even have looked at the Streamable API

You’ll notice there’s no documented way to set the title of your videos.

Thankfully, this is really easy to do.

Simply add the title get parameter to your request!

Your imported videos will now have a title!

I immediately decided to try using an alert on my Google Analytics workbook.

I created an alert that will let me know when certain pages take longer than a second to load so I can look at logs and see what happened, so I can fix any issues with queries that my code base has!

I’ve finally finished goalie pages. Featuring where they get the most shots, and from where they give up goals. Basically the same as player pages.

I haven’t quite created a viz like the player pages do though. That’s coming up next.

In the meantime, feel free to look at Carey Price’s goalie page!

I’ve added shots against locations for a team per season, and game to the Shots Dashboard.

You can see where teams give up the most shots from.

This all arose from Benning claiming most of Vancouver’s shots against were coming from the outside.

Benning says the shots against have been mostly from the outside. Also #Canucks have been limiting 2nd/3rd opportunities.

I’ve added a new feature to IcyData that I am calling ‘League Support’ — it will allow you to switch between leagues.

I’ve made this change in preparation of adding some other leagues to IcyData. Namely the AHL, CWHL and if possible the NWHL.

Currently available are the NHL and the World Cup of Hockey.

I’m going to be presenting at the Vancouver Hockey Analytics Conference on March 11th!

You can get more information here: https://hockey-graphs.com/vanhac/

I’ve put together an NHL penalties dashboard. You can view it here: 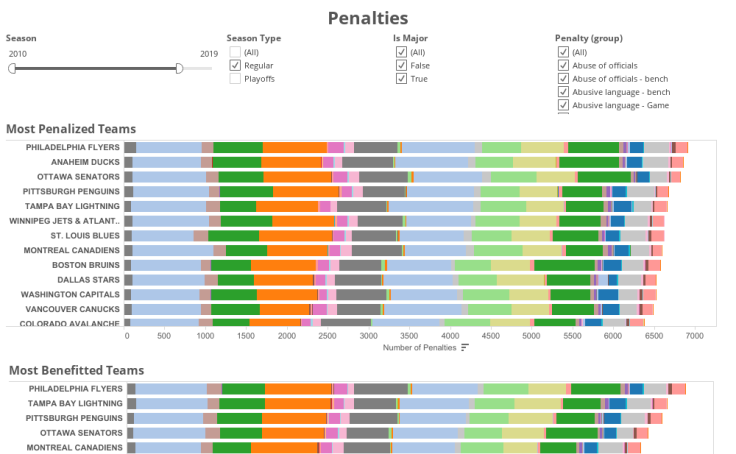 This viz actually uses the Google Sheets integration in Tableau 10.0. So once next season starts it should automatically update!